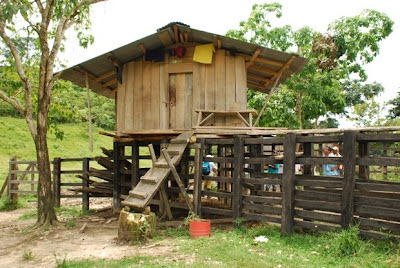 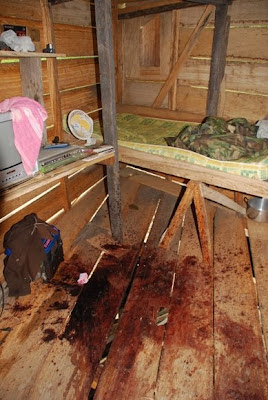 The "War on Drugs"

The helicopter swooped by a couple hundred yards away, just above the trees, as we were traveling to the community of Malvinas on June 12. We stopped at a house alongside the road and heard more helicopters. We then saw the two planes that were spraying herbicide in the U.S.-financed “war on drugs.” 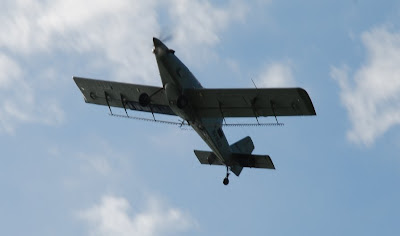 One of the planes flew directly overhead - in the photo you can see the tubing attached to the wing that is used for the fumigation. The plane was escorted by two helicopters which each had machine guns pointing out of both doors.

Peasant and human rights organizations have repeatedly denounced that the fumigations damage food crops and human health. On June 25 and 26, I traveled with representatives of the Joel Sierra Human Rights Foundation to visit farms that had been fumigated in the .

Luis Alfonso and Amilia have four children and live in a small, dirt-floored, house alongside their field of corn and yuca. They 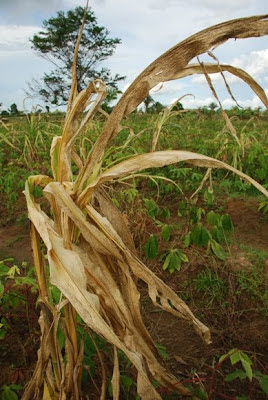 don’t have any coca (the raw material used to manufacture cocaine) but their farm was still fumigated on June 10. The plants have withered and will not produce any harvest (see attached photo). Luis Alfonso borrowed money to plant the crops, and now he won’t be able to pay that money back nor does he know how he’ll be able to provide for the family.

The United Nations Office on Drugs and Crime (UNODC) detected approximately of coca here in the state of in 2001 (the peak year, according to their figures). Between 2003 and 2007, nearly were fumigated in the state during five rounds of spraying. The amount of coca detected by the UNODC in at the end of 2007 was – the largest amount since 2001.

While the policy of massive aerial fumigation has failed to reduce coca cultivation in , it has generated substantial income for several corporations:

1. DynCorp, a corporation of retired soldiers and soldiers-for-hire, has the State Department contract for drug eradication and interdiction in , , and – with the primary focus being the aerial fumigations in . DynCorp receives $174 million per year for that contract.

2. United Technologies manufactures Black Hawk helicopters and received $234 million for the eighteen Black Hawks given to as part of Plan - a huge increase in military aid pushed through Congress by Bill Clinton in 2000 using the justification of the “war on drugs.”

3. Textron manufactures Huey helicopters and received $81 million for the forty two Hueys given to as part of Plan .

4. Monsanto manufactures the herbicide glyphosate (Roundup) that has been used to fumigate more than 2.5 million acres in during the last eight years.

According to peasant and human rights organizations in , the fumigations also benefit the oil corporations by causing people to abandon the rural areas where oil exploration is occurring. Occidental Petroleum (a corporation), Repsol (a Spanish corporation), and Ecopetrol (a corporation primarily owned by the Colombian government) are currently exploring several new oilfields in .

The peasant organizations in are calling on the government to halt the fumigations. The peasants have expressed their willingness to manually eradicate the coca in exchange for assistance with alternative crops and marketing that would enable them to provide for their families. In the last two weeks, some of the peasants have already started eradicating even though the government has not agreed to the proposal.